It's essential to have a tank champion in League of Legends: Wild Rift as well as to absorb damage for your team in team fights. Here, we'll cover the best beginner-friendly and mid-difficulty tanks in Wild Rift, and give you a couple of pointers on which tank you should pick. Whether you are a beginner or a veteran, it will be useful to you.

These are the best beginner-friendly tanks in League of Legends: Wild Rift: Malphite is one of the most versatile tank champions in League of Legends: Wild Rift as he can be played in Baron Lane, Jungle, Mid Lane, and even as a Support. Malphite's kit includes a variety of crowd control options that can deal a fair amount of damage as well. Once you hit the late game, this shield is going to be substantial and allow him to soak damage for his team when he enters or initiates altercations. One of the strongest champions in Wild Rift, Garen is the perfect tank choice for your team. When built correctly, Garen becomes a goliath with an excellent health pool as well as the ability to deal out damage when necessary. Right now, Garen is one of the best tanks picks in the game with an incredibly low difficulty to play. Alistair is a support tank that has reasonable dueling potential in Wild Rift. Kitted out with crowd control and healing abilities, Alistar is a simple champion to play and amazingly effective throughout the duration of the game. Amumu is a strong tank champion that is best suited for the Jungle position. Due to the abilities in his kit, Amumu is considered a powerful ganking jungler after he unlocks his ultimate. His ultimate 'Curse of the Sad Mummy' can stun the entire enemy team at once. Amumu's ultimate can also be used to combo with other ally champions to gain an advantage in team fights. Blitzcrank is the most played support champion in Wild Rift at the moment. Thanks to his play-making potential because of his first skill 'Rocket Grab,' he is still a fan favorite. He is easy to play with and useful as well. One crucial hook in a team fight can turn the tide of the battle in your favor. The silence on his ultimate 'Static Field' is also convenient in team fights. Xin Zhao is a favorite champion of many, and a great jungler fighter to pick. He is easy to play and can be very helpful to have in your team. You can either choose to be the initiator and lead the charge into the fight or just be sneaky and take the squishy enemy champions out stealthily. Xin offers a kit filled with multiple CC abilities and has a great 1v1 capability. One of his best skills is his ultimate, Crescent Guard, which can be a great tool in teamfights as it knocks back all enemies it hits.

7). Dr. Mundo (top laner, but could go jungle too, depending on matchup) Dr. Mundo can be flexed for both Baron Lane and Jungle. Mundo boasts a skill set that allows him to poke at enemies from afar as well as deal damage as they approach. While he's admittedly not the easiest champion to play, if you're looking for a champ with a straightforward build path and someone who's going to be incredibly durable, Mundo is the champion for you.

The next tanks are slightly more difficult to play because they require you to land key skill shots, which will greatly benefit the team. I'd put them into a more mid-difficulty tier: Often played in the Jungle, Jarvan IV is a well-rounded tank champion that is easy to play around the ally team. Boasting a shield and multiple engaging abilities, Jarvan can navigate in and out of fights with reliable engaging potential for his team and the ability to zone and control enemies. While he's one of the more difficult champions to play on this list, Jarvan is one of the most effective tanks in Wild Rift. A popular top lane champion, Nasus is powerful. He is a monster in the late game when he gets enough stacks on his first ability 'Siphoning Strike.' His ultimate 'Fury of the Sands' grants him increased attack range and health and also damages enemies that are nearby him. Out of all the tank champions in Wild Rift, Nasus is likely the one to deal the most devastating damage. Wild Rift's Braum is a great support who offers buffs to allies and some impressive durability. Braum's skillset is perfect for reducing the damage output against his ADC. With his variety of abilities, teams will be able to back up their opponents coming out on top in early level dueling situations. If you are after a less aggressive playstyle while using a tank champion, Braum is your guy.

4). Gragas (jungler, in some situations, could be played support) Gragas is a Wild Rift Champion with a tank-mage role who can become an adamant jungler champion. Despite the medium difficulty, this champion is still a favorite champion to pick. The advantages are he can inflict significant damage on enemies or can become a strong tank thanks to his abilities. Besides, Gragas has a ganking tool that is really annoying for the enemy. Singed is the most irritating champion to play against in Wild Rift. He is mostly played in Baron Lane. Due to the versatility in his kit, he is an excellent champion for split pushing in the mid and late game. Surprisingly, he can also dish out decent Ability Power damage with his poison trail while being incredibly tanky at the same time. For newer players, Singed is one of the better tank options since his abilities are straightforward and his playstyle is enjoyable.

Do you want to learn more about the game? Then check out https://lolmobileaccounts.com/lol-mobile-accounts, where we share all of our tips and tricks, and guides. 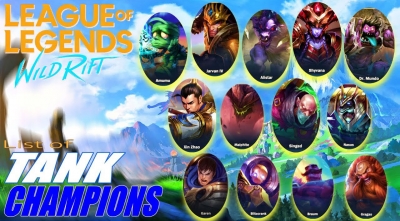 In this guide, we'll cover the best tank champions in League of Legends: Wild Rift, and give you a couple of tips.