Marksman is one of the crucial roles in League of Legends: Wild Rift because they are the key to winning games, especially in the late game. Then, do you want to know what are the best Marksmen in Wild Rift? Here, we've put together a list of the top 5 marksmen currently released in Wild Rift, to help you win more games. Let's find out below! 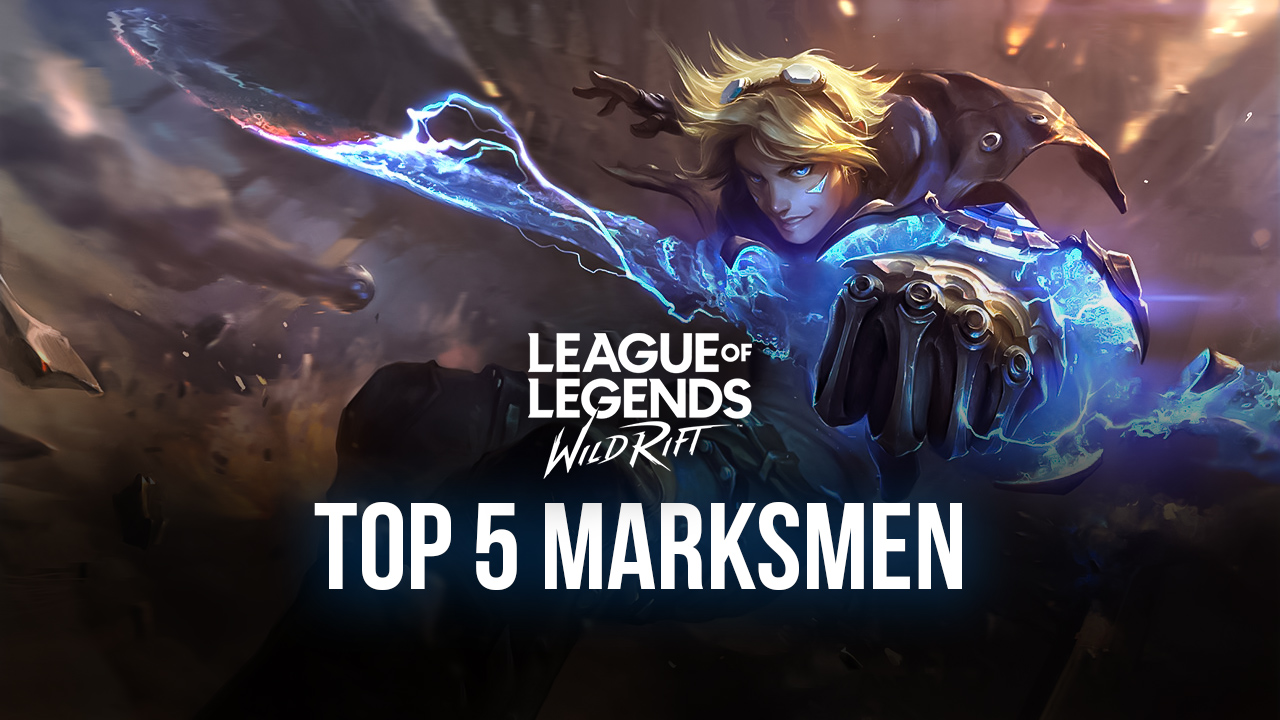 Arguably the most powerful marksman in Wild Rift, Jinx is an excellent champion for both early and late in the game.

With her versatile kit, Jinx is capable of dueling close-range enemies or picking her shots from a distance.

Also, given the smaller map size and a faster pace in Wild Rift, Jinx is perfect to quickly wear down her enemies using rockets, forcing them to back away under the tower or even recall.

In Wild Rift, she starts off the game with a decent amount of agency and keeps ramping up in power as the match goes on. She is the very definition of the word "hyper-carry" and takes over the game once she gets to snowballing in the later stages.

Her passive "Get Excited" allows her to gain extra decaying movement speed and attack speed. This gives her a temporary steroid boost with each kill and assist.

What Makes Jinx a Great Marksman?

• The rapid auto-attack speed with her Q ability
• Global ultimate that does more damage to enemies with low health
• Easily one of the strongest ADCs in the late game stage
• Her passive grants her immense movement and attack speed upon destroying a turret or securing a kill, which she can use to great effect in team fights

Despite her low-key appearance, Ashe the Frost Archer has one of the most versatile Marksman kits in the game.

She comes with many crowd control abilities in her kit. Also, she has great range and a slew of abilities that can slow targets. This allows the player to poke away at enemies, inhibiting their escape potential and securing takedowns. Her slowing abilities also benefit her when trying to escape advancing enemies.

The biggest change to Ashe in Wild Rift is the ability to steer her ultimate. Enchanted Crystal Arrow is a global ability that launches a huge frozen arrow, damaging and stunning the enemy it hits.

Players can control her ultimate path and steer it around to change its course in Wild Rift. It makes the ability much more mobile-friendly, and players will find it harder to miss, no matter how far the target is.

What Makes Ashe a Great Marksman?

Jhin is one of the most challenging marksmen to play in Wild Rift.

Jhin is all about setting up traps and effectively playing around with his four bullet cap. Unlike the rest of the ADCs, he cannot constantly fire his gun and be forced to reload his pistol after the 4th shot. However, the four shots in themselves are devastating.

His third skill, 'Captive Audience,' Jhin can place traps anywhere on the map that detonates when minions or enemy champions walk over it. Moreover, these traps grant some amount of vision to Jhin and his ally team.

While the early game can be a little difficult, once you are able to build adequate gear, Jhin becomes lethal, and team fights can be devastating if he's able to sit in the backline and fire damage at targets. In the current Wild Rift patch, he is incredibly powerful.

What Makes Jhin a Great Marksman?

• Extremely high damage at all stages of the game
• Can protect himself from ganks with good placements of his traps, which act as wards and long-distance damage
• His ability to root opponents from far away and his ultimate does heavy damage from long distances as well
• Did I mention he does an insane amount of damage?

Another easy-to-understand marksman choice, Miss Fortune is a spell-based ADC who can build several ways, but she is most effective when built for damage.

Suffering from a slow early game, Miss Fortune becomes an extremely valuable member of the team later in the game with a kit tailor-made to assault multiple enemies at once.

From her Double Up to her ultimate ability Bullet Time, Miss Fortune has many ways of dealing damage to enemies all at once. When near the end game, these abilities can deal with devastating power.

• Extremely high damage, probably in the top 2 for ADCs in the early and mid-stages of the game
• Great zoning potential with her E ability
• Her ultimate is the big game-changer (surprise, surprise): She unleashes  a torrent of bullets in a cone-shaped area and it does heavy damage

Despite the nerfs to his damage from his primary ability 'Mystic Shot' and his core item 'Manamune,' Ezreal is still a top-tier marksman. He is probably the only spell-based damage marksmen in the game who excels in bursting down opponents in a short time.

What makes Ezreal one of the best marksmen in League of Legends: Wild Rift is his ability (Arcane Shift) to blink over walls and enemy skill shots (at times) to properly position in team fights. With his ultimate, 'Trueshot Barrage,' which is a cross-map ultimate, Ezreal can deal damage to multiple enemy champions that the skill passes through.

What Makes Ezreal a Great Marksman?

• Blink ability that acts as a gap-closer and an escape
• Sufficient damage with his abilities...if you can land them
• Global ultimate to help teammates from far away or to cheese a kill on a low-health enemy

These are the top 5 Marksmen in League of Legends: Wild Rift. What are some of your favorite Marksmen and why? Let us know down in the comments section below! Also, visit the news page of lolmobileaccounts.com, stay tuned for more information about games.