In League of Legends, some champions might not be very impressive at first, but they become a champion who can single-handedly carry a team in the lane. Here, we present the 10 strongest champions were designed to dominate in the late game. 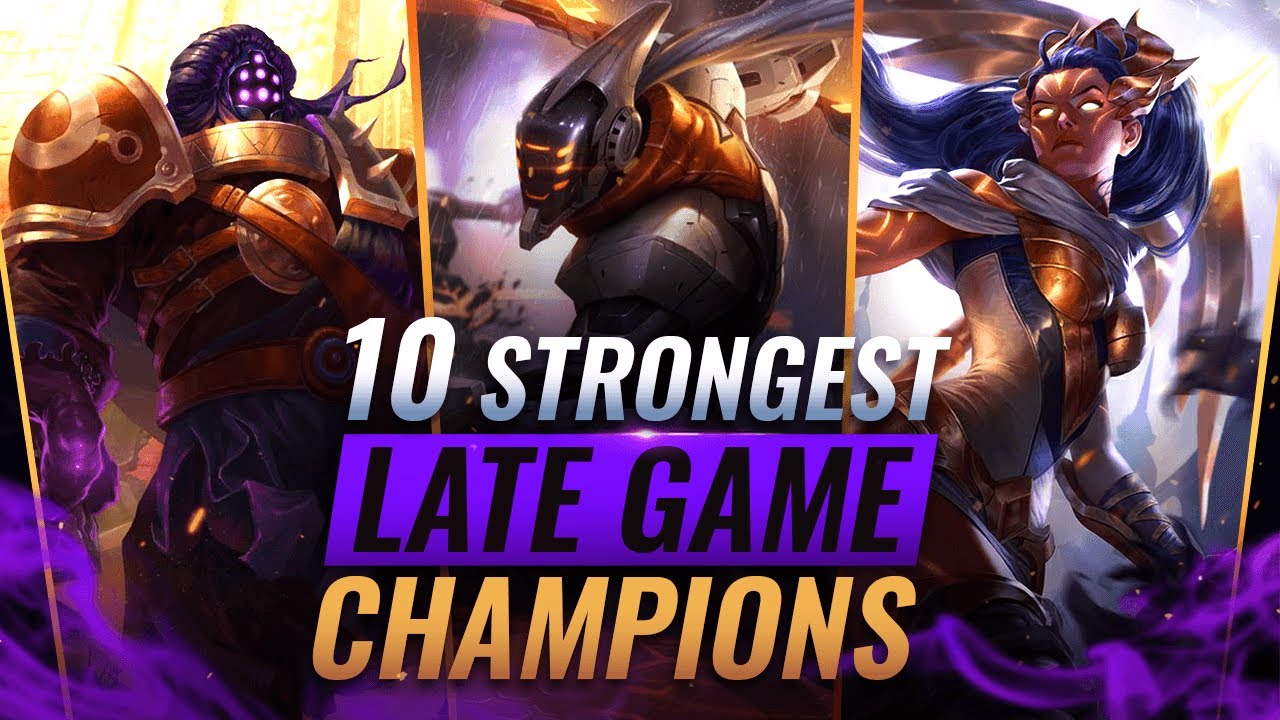 1. Kog'Maw, The Mouth Of The Abyss

This champion is a feared creature of the Void. In order to understand his surroundings, Kog'Maw must drool on things. Unfortunately to whatever he is drooling on, his saliva is very caustic. This is not an evil creature, but it is destructive in nature.

This little, dangerous creature starts as an easy target and evolves into an annoying nuisance until right before the late game. When farmed enough, the Mouth of the Abyss dishes out an insane amount of damage and magic damage based on the target's maximum Hip Points.

Shauna Vayne is a Demacian woman who hunts down monsters, secures her place among the late-game titans due to her Silver Bolts.

Vayne does decent damage, can constantly turn invisible during team fights, and can knock people away from her when she needs her. Most importantly, her Silver Bolts are a passive ability that causes bonus damage on every third consecutive hit. The important thing to remember is that bonus damage is actually true damage based on the target's maximum health. Meaning, the later the game goes, the greater Vayne's damage is.

Vayne's problem is the lane phase. Her ranged attacks do not have the greatest range. She also lacks a poking skill that won't put her in danger. Until she gets her ultimate, her escape is weak and her range is short, making her early levels hard to manage.

In the same way that Kai'Sa seems to be both an assassin and an ADC, Senna works as both a support champion and a bot lane champion. With amazing sustain thanks to her Q, Senna is a force that can assist in team fights as a damage dealer and a healer.

Units that die near Senna might drop a soul to collect to increase her attack damage, attack range, and critical chance. Eventually, Senna becomes a fast, 100% crit chance ADC that outranges a tower.

4. Azir, The Emperor Of The Sands

The reborn Emperor of Shurima, Azir was a mortal who recently returned to the world as an Ascended. Now, Azir is capable of conjuring soldiers of sand in order to fight for him in the Fields of Justice.

His early game is truly weak. He needs to level up to have all soldiers at his disposal, but he also needs a lot of gold. Late game, well farmed, Azir's damage per second is unmatched. His basic attacks executed by three sand soldiers in an area are in a whole new level of destruction. A perfectly positioned Azir in a team fight can melt down the HP of the adversaries in a couple of seconds.

5. Veigar, The Tiny Master Of Evil

Veigar is very much a popular champion, but he has a bit of a reputation among some players as one of the easiest characters in the game. This isn't to say that Veigar is just for beginners, though, as he's remarkably powerful if you manage to stun your opponents at just the right time.

When a Veigar is able to effectively scale into late-game, he's a monster. Primordial Burst is a simple point-and-click damage ability that deals increased damage based on the enemy's missing health. As a combo finisher, it can delete squishy targets near the start of the game with ease. At the end of the game, even tanks will have to fear the Tiny Master of Evil.

This champion saw his family be taken by the Abyss, making him decide to fight back. Kassadin uses forbidden technology and magical artifacts combined in a special way to grant him all the power he needs while he hunts down his enemies.

Kassadin has a weak lane phase, but when he reaches level 11, he should have enough power to start ambushing and wiping out squishier champions. By the time Kassadin reaches level 16, it might be quite hard to stop him. His ultimate cooldown will be very low, and he might show up and leave in a flash, dishing out tones of damage when doing so.

Wherever there is life, there is also death, and in Runeterra, Kindred represents the twin essences of death, according to their lore they are capable of reaping a God. While the wolf hunts down and reveals the prey, the lamb offers its targets a swift release from the world of the living.

Although Kindred is not immediately seen as a threat, The Eternal Hunters have the potential to overpower any character the longer the game progresses. That is because this character does not cap on how much they will grow due to Kindred's Passive, Mark of the Kindred.

This skeletal mage is an odd creature that is neither living nor dead. Karthus sees his embrace of this perfect merging between life and death as something beautiful.

Karthus starts with low damage and weak stats. He also lacks mobility and burst damage. But he can snowball with a few early kills granted by his ultimate. During the late game, his ultimate can force the adversary team to start a team fight at half health. That alone makes him extremely powerful.

9. Nasus, The Curator Of The Sands

The Curator of the Sands is one of the coolest concepts in League of Legends. An Ascended from Ancient Shurima, Nasus is as powerful as he is intelligent and can become somewhat unkillable later in the game. He returned from exile once Shurima rose again, and vowed to make sure it would never fall a second time.

Thanks to his Syphon Strike, Nasus can become stronger even when his gold and level have capped. This skill allows him to farm damage infinitely, making him more dangerous the longer the game progresses. His passive life-steal will keep him alive in the lane, and time will make him super strong.

Kayle is essentially the Thanos of League of Legends. It doesn't matter how many times she is defeated, she will always remain inevitable.  If Kayle is allowed to hit her item and level spikes she has the capability to win a game through hybrid damage and tremendous attack speed.

She has a difficult lane phase and won't start gaining any traction until level 11. Even then, she has to have a decent amount of gold to cause any real effect. But if players farm well and reach level 16, Kayle becomes an unstoppable monster who can carry her team by turning invulnerable and wrecking anyone on her path. Kayle is one of the strongest late-game champions in League of Legends, omnipresent due to her incredible late-game scaling and solo carry potential.

Who do you think is the strongest? Please let us know in the comments section! Next, we will continue to launch new game guides, stay tuned to LoLMobileAccounts.com.