Which Champions Have the Highest Skill Caps in League of Legends? 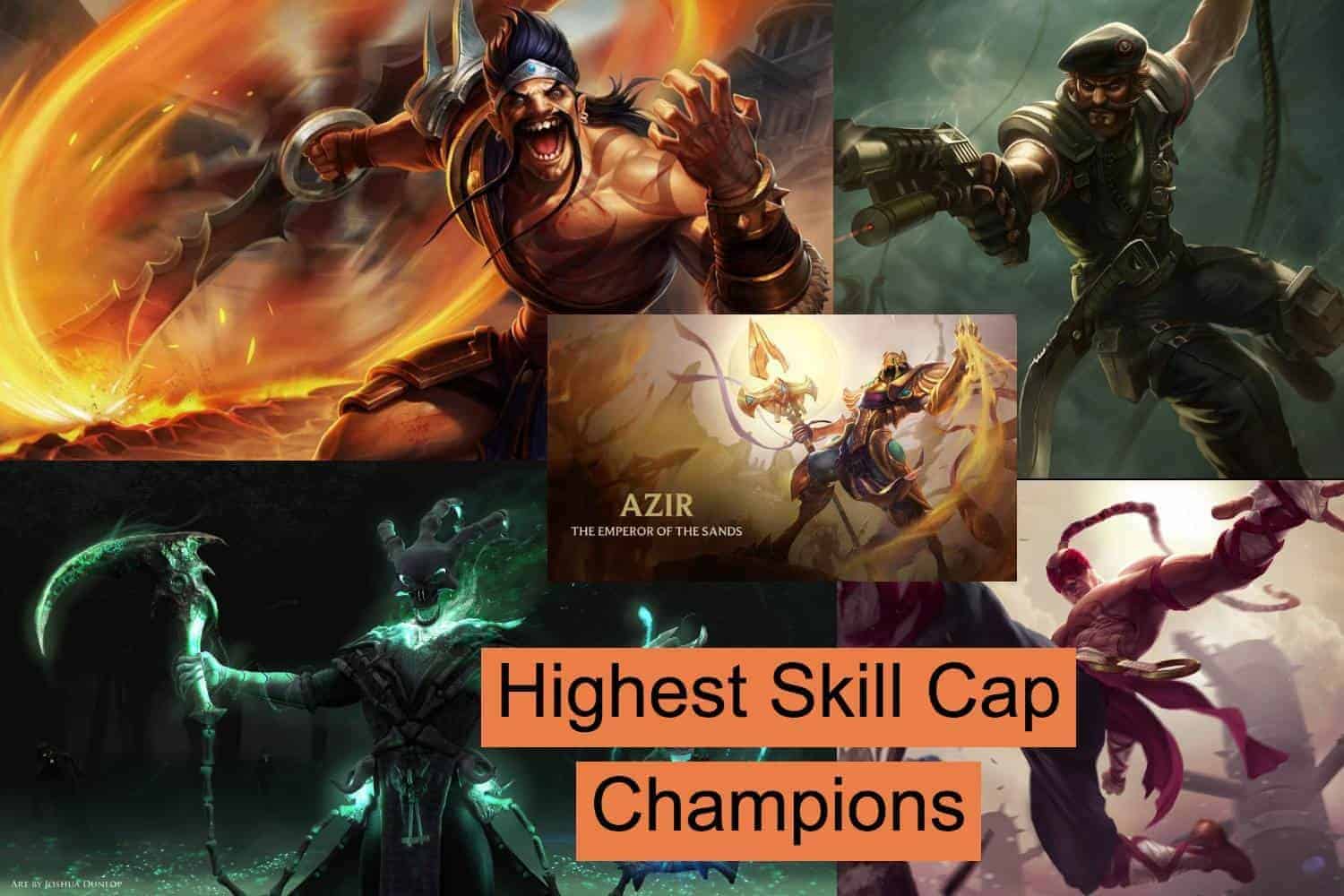 Gangplank's skill cap is off the charts. There's always room for improvement, no matter how much you've mastered him. He can accomplish so much using his barrels. His oranges need precise timing, his ultimate needs to be perfectly placed, and his ultimate item needs to be carefully considered after assessing the enemy team.

There's no denying that he has many potentials, as long as you have mastered him. You can position his barrels however you like, which is pretty cool. To really master Gankplank, you will need to know his range and damage.

Jayce has one of the most complicated kits in League of Legends. He is a transforming champion, and switching his cannon to the ranged attack mode can still lead to one of the strongest long-range bursts of any character in the game.

Although his melee attacks can be quite bland, both forms are still potent, and you can usually swap between them against different opponents for a wider variety of strategies. He's undoubtedly a powerful option for any AD-minded players and a wonderful main choice if you like a character. You can play without thinking too hard about counters.

Riven is a mechanically intensive champion with an incredibly high-skill cap. You need to know her combos, abilities, Autoattack canceling, animation canceling, and many other tricks to master her.

Her animation canceling isn't exactly easy while you're trying to balance your kit. With every Q, you can auto-attack cancel and use Tiamat for more combos.

To fully carry with Riven, you need to know how to play her to your advantage and gain a lot of gold.

Nidalle is also a transforming champion. However, she is used more as a jungle champion. She is very squishy and requires quite a bit of kiting when it goes around jungle camps.

What makes Nidalee such a skill-intensive coin flip pick is how she either secures early leads and snowballs the entire game, one-shotting the enemy carry, or how she falls incredibly far behind and gives her team another reason to blame the jungler for their loss.

She is squishy but deals a lot of damage. If you fail to deal with all this damage, you may find yourself caught among enemies and end up dying. If you know how to play Nidalee, she becomes solid and literally sweeps all around the game.

Gank timing, jungle clear speed, and spear accuracy only come after a lot of game time.

Lee Sin is a play-making machine. He has so many different combos you can use, but mastering them isn't going to be easy – this is the type of champion that requires super-fast decision-making.

Lee Sin basically has 7 abilities, so it's tough to master all the combos with him. Insect combo is his most popular combo – this involves using the Q on the enemy, jumping on them, flashing behind them, then ulting them to your tower or team.

Lee Sin also doesn't scale into the late game, so you have to be an early game bully in the jungle, ensuring you're getting enough gold and kills to carry on to the late game.

The Insect combo is one of the many combos Lee Sin can use. To master Lee Sin, you will need to master all of his combos.

Azir has possibly the highest skill cap in the entire game and is one of the most mechanically intense champions. His playstyle is completely different than other champions, as you have to maneuver with his soldiers and know a few combos.

When you play on Azir, not only do you have to position him correctly, but you also have to tend to his soldiers. This is the type of League champion that has a variety of playing styles for you to try. Once you have mastered this champion, while it's difficult, you could carry the entire team.

To master Azir, it will take some time because you need the right timing, movement, and character positioning.

Yasuo has a very high skill ceiling due to his intensive mechanics. The more you try to improve, the more areas you'll see you need to work on.

While he isn't fast enough to prevent targeting, his wind-barrier ability can make it impossible to land a ranged ultimate on him. It's also tremendously helpful in team fights and can completely negate enemy ultimates sometimes.

His passive grants enough shielding that other mid-laners can struggle to get a takedown on him. Yasuo also isn't as limited as Yi, having impressive crowd control for various situations and working well in nearly any starting lane.

He is very susceptible to ganks and can also be easily shut down using proper CC and the Exhaust summoner spell.

Yasuo's kit isn't difficult to play, but it is one of the most difficult ones to master.

Vayne is the strongest ADC champion to cut down all champions.

Vayne is famous for creating toxicity wherever and whenever she is selected. She is a flashy, skill-based marksman who is hard to kill as she is hard to hit.

During team fights, Vayne needs to do a lot of damage and make sure she cuts down tanks or kills enemy ADC within seconds. The only weakness is that she is very squishy, and once she gets caught by an assassin or CCs, she is most likely dead.

Vayne is an incredible support carry, but she is heavily reliant on her team. Unlike picks like Tristana, Ezreal, and Kai'Sa, she doesn't come with many engagement tools or even escape options.

Kalista is an excellent ADC champion and is very mechanically advanced.

Kalista's auto-attacks aren't able to be canceled, which is something many Kalista newbies struggle with. Playing this LoL champion will require a lot of mobility and positioning experience.

Kalista is very squishy, and apart from the hop, she really has no escape tools at her disposal. Hence, point-and-click CC's can counter her rather effectively, and it's one reason why wielding her effectively requires a great deal of attack move prowess and game knowledge.

Kalista players also need to know when to use her E, which targets to focus and stack her spears on, and when enough spears are enough to finish off a champion. All of this means you need a lot of practice and experience to master Kalista.

Bard has the highest skill ceiling among all the supports in League of Legends at the moment.

Not only does he have an incredibly complicated kit to wrap one's head around, he even comes with a high-risk, high-reward ultimate ability called, Tempered Fate which can either win or lose players their games.

Unlike the other supporters in League of Legends, Bard has no middle ground. Either he is aiding the enemy team or shutting them out so hard that they have no other option but to rage quit.

These champions will have you dominating the game in ways you never could with those easy champions, but they are more challenging. Follow LoLMobileAccounts.com to learn more about lol champion guides, such as the best AD Carries, Mid Laners, Top Laners, Supports, Junglers, etc. Of course, you can also buy lol account here.