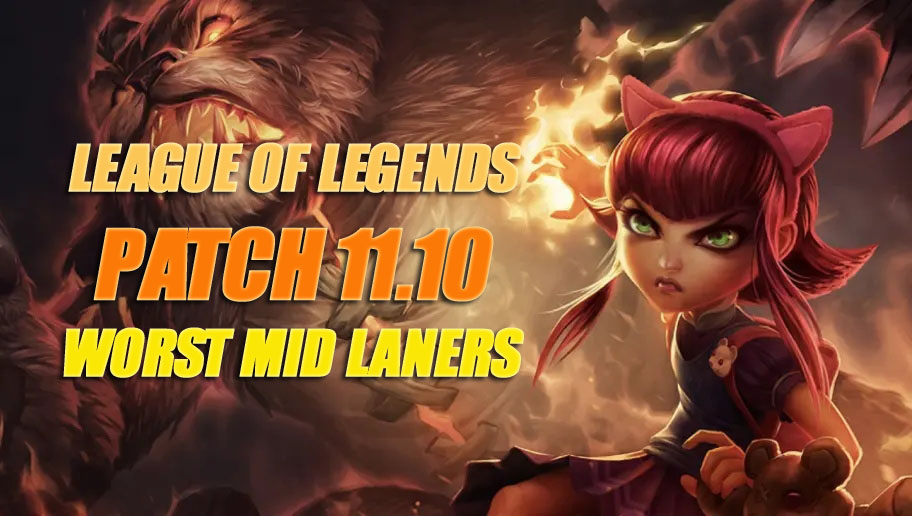 Many League of Legends veterans will tell you that Azir is one of the game's hardest champions to master. While he was difficult, the potential payoffs were huge. Azir would deal massive amounts of damage in team fights while also staying at a safe distance. Right now, however, this once great champion is now a complete afterthought in the mid-lane. Azir's problem is not only that he isn't meta, but his kit as a champion is tough to use. So even if you wanted to utilize this champion, you'd be severely handicapping yourself. Locking in Azir is literally playing one of League of Legends' most difficult and weakest champions at the same time.

One of the most picked mid-lane champions in League of Legend history, Orianna dominates her opponents in the lane and even in late-game team fights. She has handy tools and mobility, making her a solid pick at the pro level for mechanically sound and seasoned with her. Orianna's ultimate ability Shockwave can single-handedly turn the tides of battle. But Orianna is not for the faint of heart. For those looking to climb their way to higher ranks, it's not worth the hassle for you to even think about using this champion.

Syndra is a quintessential mid-lane with damage, crowd-control, utility, and burst. She dealt tons of damage and could easily one-shot enemy carries. But it requires a lot of setup and maneuvering that most players aren't willing to commit to. If you understand how to play Syndra, she can be a devastating pick, but otherwise, she can be very frustrating as a champion pick.

One way to get better at Mid Lane is through roaming, and Twisted Fate is perfect for this. Roaming in the mid lane can generate so much map pressure, kill advantage, and more. Twisted Fate's ultimate does that by allowing him to teleport a considerable distance away, aiding his side lanes, grabbing extra towers or objectives from those plays. Furthermore, Twisted Fate has a great lane presence in his kit, with a blue card generating mana, red card pushing waves out, and gold card stunning an opponent. Although mages are mighty right now, if you can't play around with your cards and efficiently use your ultimate to manipulate fights, your team will essentially be playing 4-vs-5.

Zoe's damage can be easily blocked, and against champions with high mobility, she's basically dead meat. Also, her damage isn't the highest. Her ultimate is useless. Her normal skills outside of her Q don't help players who need to handle their matchup. It's always a battle to sustain until team fighting begins, and that makes her a terrible pick as a champion.

The above are the five worst mid laners in League of Legends patch 11.10. Also, make sure to follow LoLMobileAccounts.com for more LoL news and analysis.