Wild Rift: Which Champions are Best in Mid Lane?

Mid-Lane is a position in League of Legends: Wild Rift, which is usually reserved for a Mage or Assassin as they tend to have the ability to roam and clear minion waves effectively. So, who are the best Mid-Lane Champions in Wild Rift? With this in mind, we listed the best mid-lane champions and ranked them. 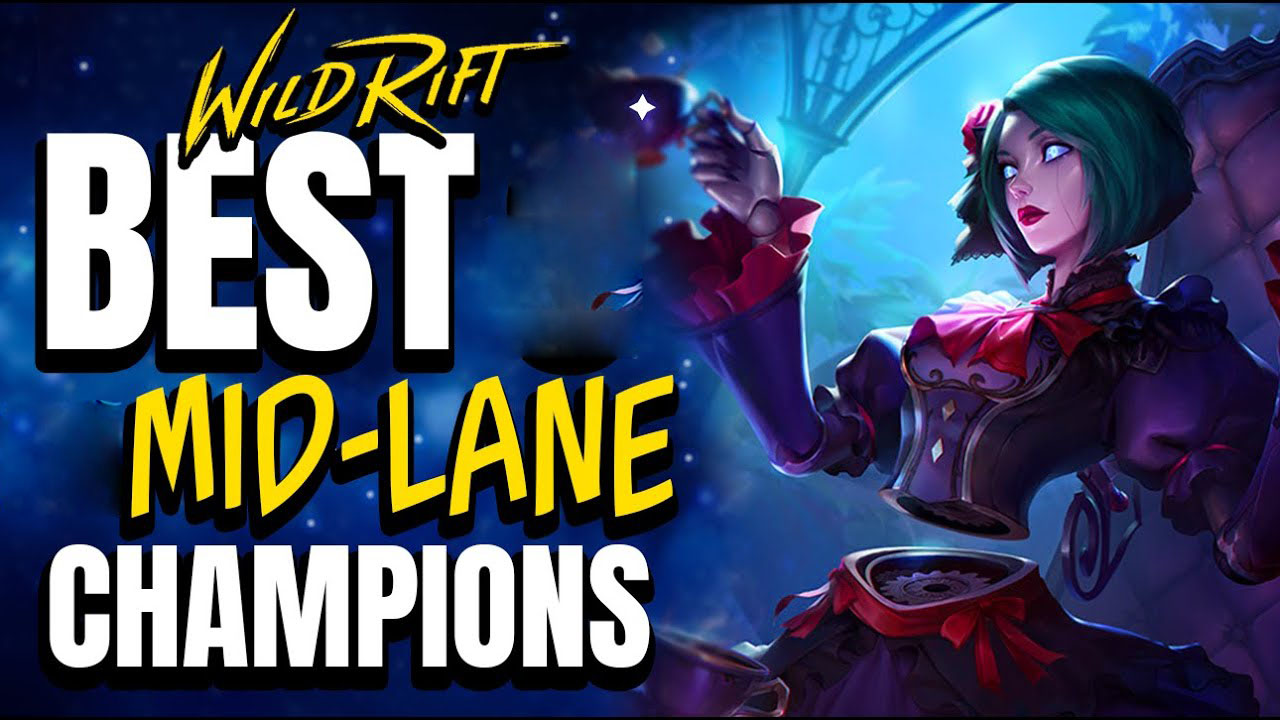 These champions are average at best, often reserved for playing specific matchups or trying to catch your opponent off guard with an unexpected pick.

In Wild rift, Fizz is incredibly slippery and one of the hardest mid laners to deal with in the game.

His 3rd skill, Playful/Trickster, is an outright menace during both the laning and late-game team fights.

His kit is packed with damage and can one-shot the opponent carry even if he misses Chum the Waters' ultimate ability. Fizz's in and out playstyle makes him one of the safest assassins to wield in Wild Rift, and he comes with significantly lower risks than the rest on the list.

He is highly mobile as well, and the on-hit effects that he can apply with Urchin Strike make Lich Bane one of the best items to empower hit kit.

Although Annie is easily one of our favorite character designs in Wild Rift, her abilities leave a lot to be desired in the mid-lane. There's a lot of room for optimization within her toolkit, and she has good tools for lane pushing, but her limited range holds her back.

Kennen, the Heart of the Tempest, is one of the most flexible mage champions in League of Legends: Wild Rift. He can be either played in Baron Lane or the Middle Lane. In fact, he can also be played as a support champion down in the Dragon Lane.

With high damage output and DPS (which is kind of rare for mage champions), Kennen ultimately excels in team fights and other skirmishes happening anywhere on the map. Despite having a small size like just any other yordle champion from the Bandle City, Kennen can turn the tide of any team fight with a picture-perfect ultimate.

Zed is by far the best assassin champion in League of Legends: Wild Rift. Zed can literally kill any squishy champion in a single combo. Veteran MOBA players may find it easier to play with Zed than players who are new to the game. The best thing about Zed is that he can switch his position with his shadows from his second skill, 'Living Shadow,' and his ultimate skill, 'Death Mark.' Zed can dish out tons of physical damage in a short time, which makes him a lethal champion.

The champions in B-Tier are better than average but don't necessarily have the same juice as A-Tier and above.

Lux's slow-charging ultimate has ridiculous range and power. Her ability to pin down enemies and shield allies while dealing heaps of damage makes her extremely useful in the mid lane. Her abilities are slightly trickier to use than other mages like Ahri, making her a bit less consistent, although a strong Lux can easily carry a team.

Twisted Fate can be a great pick in most situations since his kit works well with an AD build and an AP build alike. No matter which builds you choose, however, his playstyle will not change much.

When translating from League of Legends into Wild Rift, Aurelion Sol got no new tweaks to his kit. He plays out the same way in the mobile version as he does in the base game.

Though his abilities may not look like much on paper, they do a deceptively high amount of damage when combined.

The correct way of playing Sol in Wild Rift is always to keep him on the move. Positioning is going to be key during the laning phase and late-game team fights.

Aurelion Sol requires a decent amount of practice to pick up but can be quite rewarding during late game team fights once mastered.

These picks are still excellent choices for the lane but lack just a little something compared to the tiers above them.

This champion is excellent for controlling lanes and chipping away at enemy champions. Her ultimate is extremely strong as both an offensive and defensive tool, allowing you to dash in and out of danger whilst racking up kills, and her ranged enchantment can be extremely effective at singling out and neutralizing enemy threats. She is vulnerable to ganks from the enemy jungle until level 5, but after learning Spirit Rush, she can play aggressively and begin to take over her lane.

Diana is an Ability Power damage-based Assassin champion in League of Legends: Wild Rift, which is generally played in Middle Lane or the Jungle. Her passive ability 'Moonsilver Blade' grants her bonus attack speed, further increasing after she casts ability. Diana's first ability, 'Crescent Strike' afflicts enemies with Moonlight and reveals them for three seconds. Her first ability also deals magic damage in an arc before expanding.

Her other abilities include Pale Cascade (temporary shield) and Lunar Rush (a small dash.) Diana's ultimate, 'Moonfall,' reveals and draws in nearby enemies towards her location while dealing with the damage and slowing them down for 2 seconds.

She maneuvers well, and, thanks to some recent buffs, her damage output rivals the very best champions on the roster. She hasn't dominated nearly as hard as Katarina or Akali, but she can absolutely carry a game when played correctly.

Yasuo retains his place as an excellent pick in the mid-lane.

He is a Fighter-Assassin with a decent set of skills. Yasuo has great damage and Dash skills that allow him to come close to his targets with ease.

What makes Yasuo dominant in the Mid-Lane is his Wind Wall (2), which allows him to block any projectiles (basic attacks or skills) for 4 seconds. With this skill, the enemy Mage will have difficulty facing him as Yasuo can easily block their skills with the Wind Wall.

Galio is a tank/mage that is well suited in the mid-lane. He is exceptionally good at initiating team fights and serves as the team's tank while also dealing a ton of AoE (Area of Effect) damage.

Applying his unique combination of crowd control, mobility, and entry damage, Galio looks to be an all-around great pick against many other popular laners.

Orianna is versatile and powerful in Wild Rift. Her ability to scale tremendously well into the late game makes her so sought after by players.

Orianna's ultimate ability Shockwave, can single-handedly turn the tides of battle. It's the most impactful ability in the game, but making the most out of it and not missing it completely, takes a lot of practice.

Wild Rift's most recently created champion Seraphine is one of the strongest support picks currently in the game. Boasting a slew of spells with crowd control potential, Seraphine is perfect to set up takedowns or hold the enemy back while she and her team make a quick escape. Much like Blitzcrank, the value in using Seraphine as support is not solely in her zoning abilities but also in the damage output she can create. With the right build, Seraphine can easily duel with many of the champions currently in Wild Rift. If you are after mage-based support, Seraphine is your best pick.

The finest laners with which to absolutely steamroll your opponents. Any champion in this tier should be considered extremely valuable due to the current state of the game.

Another great Champion you can use in the Mid-Lane is Akali, an Assassin-Mage with immense burst damage. During the laning phase, Akali can exert enough pressure on her matchup by using her Five Point Strike (1) and Assassin's Mark (Passive). With just a simple combo, Akali can dish out significant damage on the enemy. While she can be harder to master than the other Assassins, her ability to slip between the enemy team's fingers is unmatched, and she plays well into some of the more popular picks on this list.

Katarina, the infamous Noxian assassin, might be the strongest individual champion right now. Katarina is probably one of the few assassin champions in League of Legends: Wild Rift that can one-shot the entire enemy team or destroy them in a matter of seconds. The Cooldown reset on her abilities after she gets a takedown separates her from the rest of the champions. Also, her mobility is excellent to get in and out of team fights with ease. Katarina is mostly played in Middle Lane. What makes Katarina so unique is her ability to dish out severe DPS damage without being a marksman, thanks to her ultimate ability, 'Death Lotus.' Katarina can quickly turn the tide of any team fight in favor of her team with a picture-perfect ultimate.

These champions are clearly overpowered in the game's current state and will likely be prioritized early in the picking phase. Keep in mind that Wild Rift hit almost 3 million downloads in one day, so that's a lot of players.

Bursting down champions is a common characteristic for mid laners. In addition to bombing down opponents, Ziggs also scales at pushing.

A passive ability that empowers Ziggs' basic attacks accompanies his set of explosive spells that lets him push out any lane. If you notice your enemy going back to base, you can easily take down a tower to half HP and even contribute to team fights with your massively ranged ultimate.

Corki lands in the highest tier due to itemization. The changes to Crystal Sapphire in patch 2.2 boosted his potential to spam abilities in lane and dish out unmatched damage throughout the game. While he largely relies on hitting skill shots and knowing how to position well in team fights, his unique ability to damage frontline champions with his Gatling gun while harassing the backline with his abilities means that Corki can win fights nearly singlehandedly.

Let us know if there champions that we forgot to add. Or share with us your views on our ranking. Also, you can buy cheap LoL Mobile Accounts from our website while enjoying fast, safe, and excellent service.